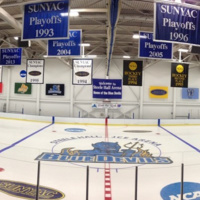 The Steele Hall Ice Arena is home to the Fredonia State Hockey team. In the summer of 2013, the arena added a brand new arena.

The arena plays host to the annual Pink the Rink game each February -- an event once featured on ESPN's Top 10 plays. The team has raised over $50,000 since its first year.

Featured along the walls of the arena is a photo area of the dozens of Blue Devil icers that have gone on the the professional ranks. In addition, nine All American plaques and team photos from each season adorn the wall.

Steele Hall has played host to SUNYAC Tournament games several times. Banners hanging from the ceiling commemorate the Blue Devils trip to the Division III National Championship game and NCAA Tournament. during the 1993-1994 and 1994-1995 seasons.

Besides Fredonia State collegiate hockey, the Steele Hall Ice Arena is in use nearly 18 hours a day during hockey season from September through March. The Fredonia State Club Hockey team as well as the Dunkirk-Fredonia Steelers call Steele Hall home. Open skates, youth and adult leagues, and various other campus activities take place in the arena.

Parking is located next to Dods Hall or in one of the parking lots next to the Natatorium's main entrance.