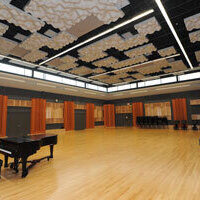 The Robert and Marilyn Maytum Music Rehearsal Halls, Mason 1075 and Mason 1080 are the most recent additions to Mason Hall. Located at the north end of Mason Hall, they were designed and built specifically to accommodate large band and orchestral groups which have grown to as many as 120 members.