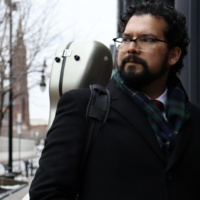 Ricardo Saeb will be visiting Campus to give a Master Class and a Concert. The program will consist of pieces from Latin America and Spain, as well as pieces from his new solo album “Zephyr.” All are welcome to attend and learn about his journey and achievements with the Classical Guitar.

Mexican guitarist Ricardo Saeb has performed in venues across Latin America, Europe, the Middle East, and the United States. His performances have been described as “perfectly balanced,” “of an exquisite subtlety,” and “simply spectacular.” His tours have taken him to cities as diverse as Querétaro, Beirut, Ciudad Juárez, Austin, Boston, Dallas, and Córdoba. Ricardo Saeb has appeared as a guest artist at international festivals such as the Festival Internacional de Música de Morelia, Festival Internacional Chihuahua, Queretaro’s International Guitar Festival, Chicago’s Latin American Guitar Festival, among others.

Ricardo has appeared as a soloist with numerous orchestras in Mexico and the USA, performing some of the most iconic guitar concertos. Ricardo has also collaborated with various artists including tenor Manuel Castillo, pianist Cliff Jackson, the Buffalo Chamber Players, and is featured in jazz saxophonist, Rusty Crutcher’s album, Romances Latinos.

Ricardo has a Doctorate degree in Musical Arts from the University of Kentucky, under the mentorship of professor Dieter Hennings.  Ricardo recently moved to Buffalo, NY, where he founded and directs a community program through the Hispanic Heritage Council of WNY, called the HHC Guitar Initiative. The Initiative gives free guitar classes for children of underserved populations, and brings some of the best guitarists in the world to Buffalo in a free International Concert Series. Ricardo teaches privately at the Castellani-Andriaccio Guitar Studio, and he recently released his premier solo recording with Fleur de Son Classics, titled Zephyr. This recording includes works by Rodrigo, Brouwer, Taméz, Gainey, Aguado, Barrios,
and Oliva.

Facial coverings are REQUIRED at all indoor events.