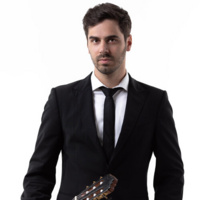 Touted as a “gifted young guitarist” by the New York Times, and “a guitarist to keep an eye on” by the Washington Post, Mak Grgic is emerging as a star on the worldwide stage. An expansive and adventurous repertoire attests to his versatility and wide-ranging interests: from the Baroque and Renaissance to music of the cinema; from ethnic music of his native Balkans to extreme avant-garde and microtonal music, Mak's extraordinary talents and tastes as soloist, collaborator, and recording artist are fueled by his curiosity, imagination, and boundless energy. As a testament to his versatility and wide-ranging appeal, in 2018 Mak was invited by legendary singer-songwriter k.d. lang to perform as the opening act for the North American leg of her Ingénue Redux Tour.

A month-long tour recently took him to China, Japan and the Balkans. Other engagements include performances and residencies at several venues in Portugal; in Castilla-Leon/Spain, at the Teatro Cervantes de Bejar; the Sarajevo Music Academy; at several venues in Slovenia; the Paris Guitar Foundation; Zurich University of the Arts, and the Hong Kong International Guitar Festival.

In North America, he has performed at the Austin Classical Guitar (in recital with Martin Chalifour); Beyond Microtonal Music Festival/Pittsburgh, the Dallas Opera (with chamber orchestra) in performances of Peter Maxwell Davies’s The Lighthouse; Dumbarton Concerts/Washington, D.C.; Kitchener-Waterloo/Ontario; the National Gallery of Art; NAMM Show/California; Strathmore Hall/Maryland; the New York Classical Guitar Society; Triangle Guitar Society/North Carolina; and numerous other venues and guitar societies across the globe.

Born in Ljubljana, Slovenia, in 1987, Mak studied guitar in Zagreb with the revered Ante Cagalj at the Elly Basic Music Academy. By the age of 14, he was balancing his world champion status in karate with his love for the guitar. Throughout his high school years, he concertized in Ljubljana and Zagreb, splitting his weeks between the two cities, as well as competing in professional martial arts contests across Europe and Asia. Following an injury to his left thumb, he made the decision to focus solely on a career in music, going on to complete a bachelor’s degree with Alvaro Pierri at the University for Music and Performing Arts in Vienna.