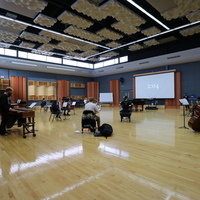 The Fredonia College Symphony Orchestra will stream its Spring 2021 concert at 8pm on Tuesday, May 4.

These works, commissioned by Director of Orchestras David Rudge, were written originally so that they could be recorded with each instrumentalist being remote but, as most students were able to rehearse and record in the same room in the spring semester, the works were recorded live for this concert.